First published on September the 28th 2020

After introducing the package robot at the factory in Odense, Denmark, DIRA (Danish Industrial Robot Association) nominated in June Juliana Greenhouses for the Danish Automation Award 2020.

The winner was announced in September. 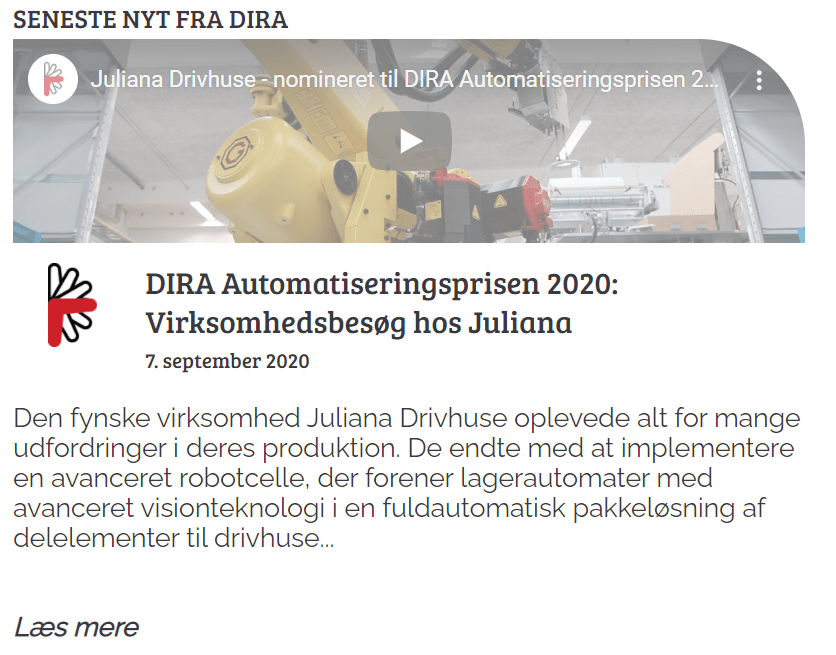 After introducing the package robot at the factory in Odense earlier this spring, DIRA announced in June their nomination of Juliana Greenhouses for the Danish Automation Award 2020 with the ground of:

Juliana Greenhouses having planned and implemented an advanced robot cell that combines automated storage and retrieval systems with advanced vision technology, in a full automatic package solution for constituent parts for greenhouses. Till now, the small greenhouse parts have been in the same packaging as the bigger parts, which has then been sent to customers. After the automation of the process, the parts will be packed in a compartmentalized box, which makes the experience and assembling better and more manageable for the customer.

This year’s jury did not doubt that Juliana Greenhouses’ solution is a great step towards becoming more automated.

We, at Juliana Greenhouses, were happy with the nice company of Vola A/S and Welltec, who were also nominated for the award.

At the beginning of September, at the Danish fair Automatic 2020, where the Danish Robot and Automation Industry was gathered, the winner of the award was announced.

The tap manufacturer Vola A/S could record a victory and Juliana Greenhouses is congratulating them.